Aquaculture Recirculation -  the biofilter is critical for the removal of ammonia and nitrogen from RAS systems.

It this picture, the cycling of nitrogen starts when the salmon release urine and feces into the tank seawater. The most nitrogenous material originates from the live salmon fish present in the tanks. Nitrogen, mostly as proteins and amino acids is simplified into a variety of end products during metabolism. The three main end products of nitrogen breakdown are:

The term "ammonia" refers to the sum of free ammonia (NH3) and ammonium ion (NH4+) and is measured as total (NH4 - N). Ammonia is the primary form of nitrogen released to the environment.

The ammonia produced by mineralization, or excreted directly by animals, is oxidized to nitrate by nitrifying bacteria. These organisms can subsist on inorganic energy sources. The bacteria reduce nitrate, often to molecular nitrogen (N2) or nitrous oxide (N2O). 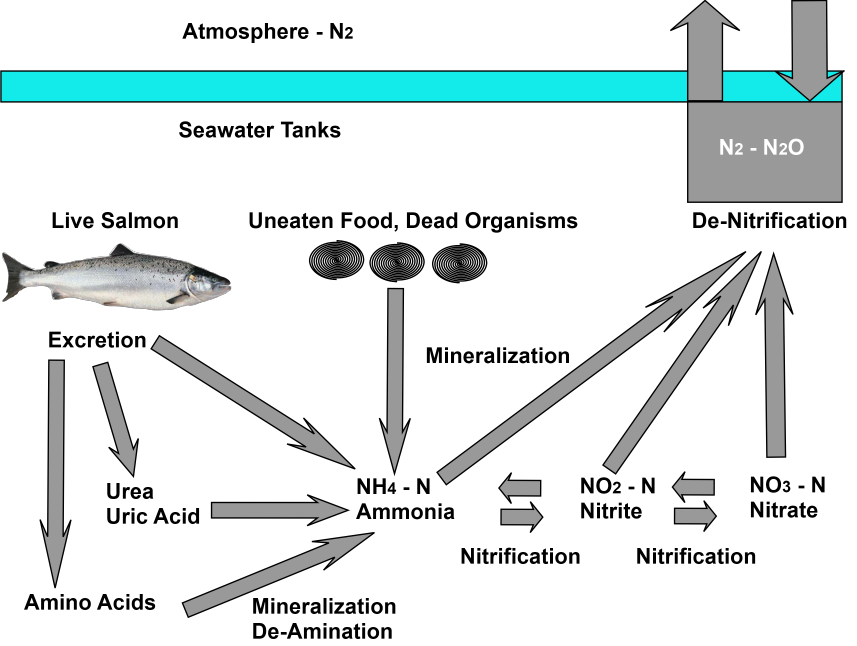 Nitrite in the blood oxidizes hemoglobin to methemoglobin, which is incapable of transporting oxygen. Methemoglobin in fishes can be detected by the color of blood and gills, which turns brown. Mortality decreases with increased salinity of the water. The maximum limit of nitrite in the water of any salinity is 0.1 mg/l (ppm).

Nitrate is not acutely toxic to aquatic animals even in large concentrations, although its effect over extended periods of time has not been determined. However, it has been recommended to keep the level below 20 mg/l in an aquaculture recirculation system.

Using bacteria the nitrification equations are:

The bacteria are primarily present in the biofilter medium.

The bacterial nitrification process is not quite as simple as depicted in the above equations. However, they serve to illustrate the fundamental principles involved. The bacterial filter is, in fact, a complex environment within which many different groups of bacteria and invertebrate populations exist, feed and reproduce. 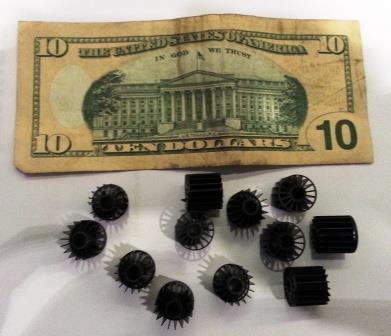 The biofilter of a closed containment seawater system may consist of submerged gravel or other elements giving a large surface. Bacteria will exist in colonies within self-secreted layers of slime coating the surfaces of the parts. The viability of the organisms will be a function of how efficient gasses and nutrients can penetrate the gelatinous matrix to the living cells inside, also affected by parameters as temperature, oxygen, salinity, and pH.

Bacteria are for the most contained within the bio filters in a fixed film on bio-elements’ surface. A new filter will require several weeks at start-up to colonize sufficient bacteria biomass. The filter is to be considered as a vast organism that requires a healthy environment and energy (ammonia) to function well; grow and maintain a stable condition. If these requirements are not satisfied, the nitrifying activity will be reduced. Nitrification is not particularly efficient below ten centigrade and works well above 14 centigrade. The nitrifying bacteria also consume alkalinity and thereby reduce the pH buffering potential of the sea water, which will become acid, especially if it is soft.  A low pH will inhibit nitrification and growth rates of the fish.

By definition, antibiotics or any anti-microbial agent cannot be used in an aquaculture recirculation system.

The Future Is Now